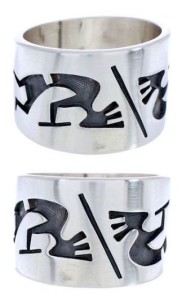 The Navajo realized the aesthetic beauty of silver, especially when it was paired with semi-precious stones. However, silver was not readily available, so the Navajo would trade with the Spanish to get silver items that could be melted down. The Navajo learned to cast silver in sandstone, and how to hand hammer the silver to make thinner pieces of jewelry. They would even melt down coins to make Native American rings and other jewelry!

When the law was passed in 1890 that coins could not be destroyed, they melted Mexican coins. In the 1880’s turquoise was combined with the silver. Southwest America and South America have an abundance of mineral deposits where turquoise can be mined. It is also often found near the surface of the ground, making it easy to retrieve. There was rarely a more popular stone to be used in Native American rings.