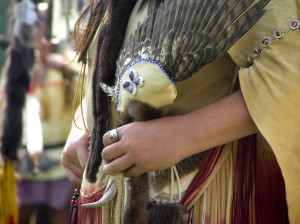 The Native American silver rings and jewelry became a trade item valued by many who traveled through the developing country. By 1872, the Zuni tribe began to incorporate silver into their jewelry making and designed original Native American silver rings and jewels of their own. Since they were already well versed in the use of other fine metals, silver was a natural addition for them.

As silversmith artistry grew in popularity, the techniques began to include turquoise and other precious stones in most jewelry and other designs. Early pieces were just surface stamped or punched décor on simple plain silver bands. The cross and crescent shapes became recognized as symbols of power among the native populace.

The appeal of Native American silver rings, bracelets and necklaces comes from their symbolic joining of life. Feathers are considered a symbol of honor, bear paws symbolize inner strength while the bear represents leadership and the buffalo is representative of a Great Spirit protector. These handmade creations carry many of these symbols stamped into their bands.